There are more pictures of the event in our FaceBook Photo Album. Video by ISU. 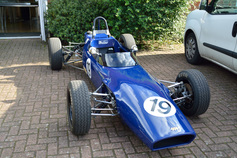 The second THORL race meeting took place on 18th October 2015.
Larkfield Slot Car Club, based in Kent, UK, were the Hosts.
Larkfield are accomplished slot car racers, but are relatively new to the HO scale, although they have made some entrance!​​
Earlier in 2015, they won the AFX Racemasters 6hr Endurance event at their first attempt.

The track was set in one of the larger venues available to the club, and was made from AFX track and BSTS sectional track. The track measured just over 81ft.

Morning racing was soon underway, and it was evident that the win at the endurance event was no fluke. ​​​Ash was the fastest qualifier, using the latest chassis from AFX Racemasters, the Mega G+.
The 'A' Final was an all Larkfield affair, until FLBT member Clive won his spot in the 'A' by winning the 'B' Final.​
Great to watch was Garys late entry see him rise up the leaderboards into the A final.
Ash took the win in the A Final, the first win for Ash, Larkfield, and the new Mega G​​+.

Lunch was excellent Fish and Chips from the Local, while we all had a chance to look at Peter Alexander's fabulous classic Formula Ford race car ​that he had brought down with him. (PAMOTORSPORT.COM)
There was also the chance of winning some goodies in the Larkfield tombola. Cars and spares were up for grabs and the good luck remained with Ash as he took top prize of a new AFX car.​

The afternoon races were dominated by a huge Le Mans field, all of AFX Mega G 1.7's.
Larkfields dominance continued with Elliot taking the win in Le Mans.

Grand touring was a battle of the other clubs with members from SCHORC, WHO, FLBT and HONK all having a go.
Callum qualified with a large margin over Clive, but could not hold him in the A Final, and Clive gladly took the Honours.​

​Final race of the day was the PRO MOD class. A quick fire race, with the fastest cars, saw Clive taking his second win of the day.

All the winning racers ​were presented with THORL medals, and a THORL mug, supplied by Dave Coley.

Many thanks go to Larkfield SCC for host a superb event, with special thanks to Ken and Nick.
Special thanks go to Dave Coley who has donated monies made on the mugs made to the Charities championed by Race Coordinator RMS.

The next THORL race is hosted by SCHORC, St Neots, Cambridgeshire on Saturday 5th December. ​​